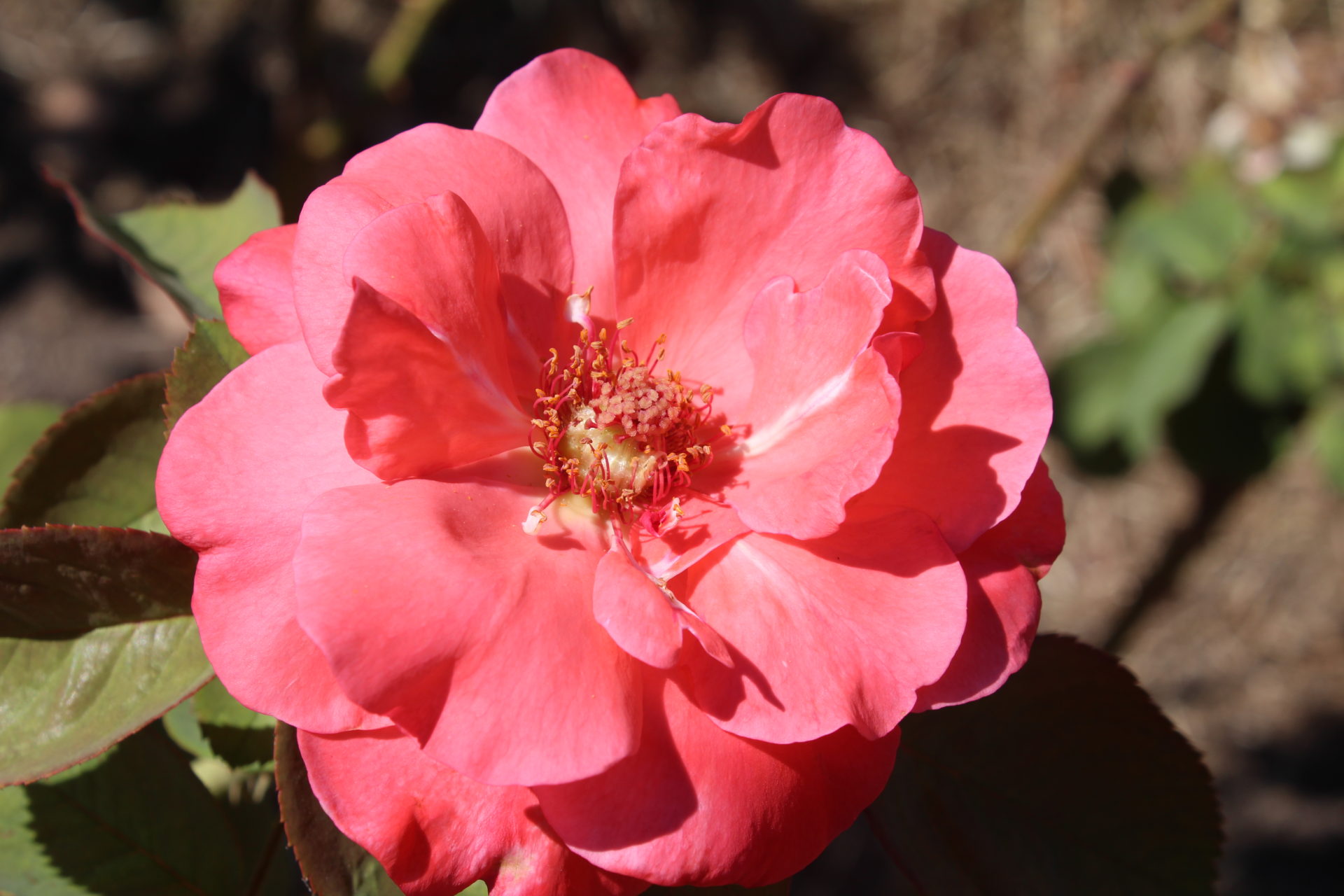 Nelson and I were part of a spirit filled church in NY for some years. We had a passion for the Lord, ministering to various people on our jobs.

Our hearts desire was to live more than a “mediocre” Christian life. We desired to see lives changed.

One year, we were ministering to a young man. We later learned that he had a drug problem. He shared with us his struggles, the life he had been living, and also about his many friends who were still in bondage. Through this encounter the Lord opened a door for  Nelson and I to begin ministering these drug addicts.  Some were in the streets, and others had already been placed in halfway houses.  Nelson began to go out to the streets with this brother, ministering to them,  pulling out a few, and attempting to place some into shelters.

We started picking them up and taking them with us to church a few days a week. 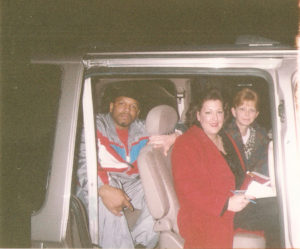 They really enjoyed our praise and worship services! There they also found fellowship with other believers, as well as food and clothing when needed. During the ride to and from church we played music or worship videos and this really ministered to them. 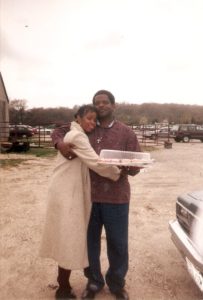 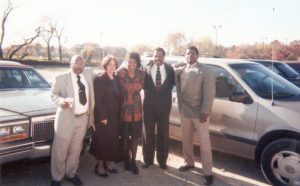 We enjoyed the many times we took them for lunch and talked with them about God.

Some were quiet, but slowly began to open up, and come alive. It was so exciting to see God begin to open their eyes and to move in their lives, to see their smiles as they began to dream again.  They felt the love of God, began to feel that they mattered and 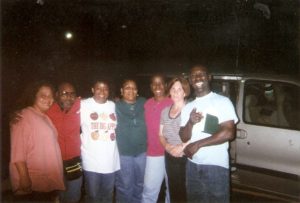 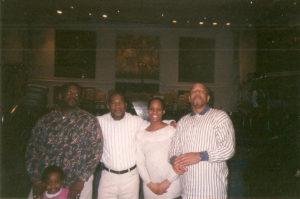 I remember a question they asked us….”Why are you doing this for us? You have so much, you don’t have to do this for us.”

That question was so unexpected! We never expected their appreciation that someone showed that they cared enough to go the extra mile to help them. It was the love of God that was in us. We are so thankful that we obeyed the Lord!

There’s one experience Nelson and I will never forget. One day we only had to pick up 2 guys, so we used our little car. We picked up the first guy, built like a big teddy bear,  who had come with us before. He directed us to the half way house to pick up a new guy. Now picture this, these were big mucsly guys! They filled out our back seat. Nelson and I greeted this new guy, and I have to admit, slightly nervously. Looking at them we thought, their lifestyle has been very different from ours, they are bigger than us and could do anything to us. But we trusted God.

So as we were driving, talking, and playing music softly, the first young man began to share with the new guy what the church service was like. He shared how God had touched him and said, “I started to cry.” Well this new guy heard that and immediately looked at him in shock saying “What! You cried!?” You’re a man! No man!” As I said this new guy was a big mucsly “he-man” type…..so he did not understand this.

Nelson and I got a silent giggle out of that. Well, we all enjoyed church and the wonderful presence of God was there. And the new guy? The spirit of God touched him and….”He cried!”

God miraculously changed his life! We, especially Nelson spent many hours talking and sharing with him. He is one who later got his life together, saved some money and began a halfway house to take in drug addicts. He began having bible studies with them. God is so, so good!

Our friend took Nelson to one young man who was on the streets, that had been saved and backslid. He had to be taken from the streets. The enemy had a strong hold on him, because although they helped him to get into rehab, he always ended up going back to the streets. But Nelson would never give up on him. Finally, through much prayer, and ministry to this brother, he was delivered!

This is one thing he always says, that “Nelson never gave up on him”. He says he wasn’t happy at the time, he was angry, but now he is happy that Nelson kept going back to get him!

Today this young man is a minister and part of another ministry that specifically goes out to the streets to minister to drug addicts!
One of the girls, from the streets, that we were ministering to ended up getting into trouble, and was placed into a program where she had to stay for a year. She could not leave, so she was not allowed to come with us to church. While she was in there, I wrote her a letter to encourage and minister to her. Later she really wanted to reach out to me to thank me so much for that letter. She said it had such an impact on her that  it changed her life. She had given her life to the Lord! I am so thankful that the Lord used me to do this!

We later learned that she and the young man I spoke of above who has the ministry to drug addicts, got married! They had known each other previously, but never had a relationship. Now the Lord has saved and delivered both of them! So they are working together for the Lord! What wonderful things God is doing!

Another young lady that we ministered to had aids. She also was on the streets and we began to take her with us. She told us that the courts prevented her from being with her daughter because of her lifestyle and addiction. When the Lord saved her, her life was so radically changed that the courts allowed her and her daughter to be reunited. Praise God! Having been in bondage, rejected and shunned for so long, she was now able to share the Love and forgiveness of God she had encountered, with her daughter and her family.

We saw another woman’s life change as she came to the Lord. Her values and self esteem and priorities were all rearranged. She reunited with her family and is living a new life!

Another young man was so ensnared that he looked like an old man when we met him. But God really changed him! Today he is serving the Lord with his new wife and he looks so different! God gave him his youth back!

Many others came with us and were touched by God. The young man who started us on this journey to the streets, had a few slips and struggles of his own, but God never let him go and today he is Passionately serving the Lord with his new wife and child. Praise God! He is a powerful man of God and his testimony has and will change many lives. 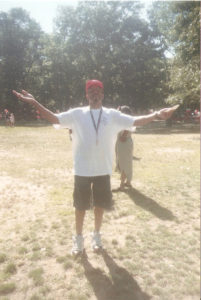 There are so many out there that just need someone to show they care.

They are caught up in the devil’s snare and need a way out! 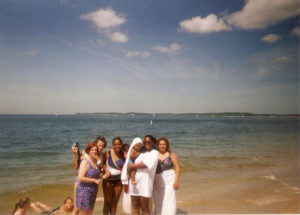 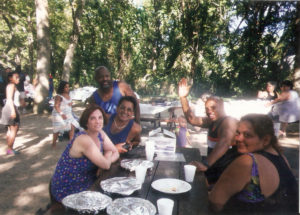 They were so appreciative and surprised that someone showed that they cared.

This was so wonderful and truly our heart’s desire, to minister in this way! We were so blessed to be a part of God’s hand of love and forgiveness in their lives. 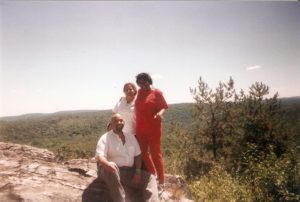 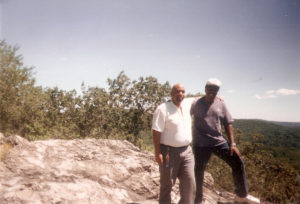 Such beautiful lives had been rescued from a life of bondage and are now in the Kingdom of God!

As you see, through this many of them were saved and a couple of them even became ministers! They began to imitate what we did for them!

“They would go back to the streets to rescue those that were in bondage to drugs, just as they had once been.” 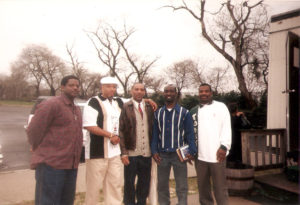 Divided but not Conquered!

One lesson we learned that we believe perhaps may be helpful to others. When we began this ministry, we used our large van and it was wonderful. Then we found that more people wanted to come and we felt that we needed another vehicle. So we purchased a mini van. The good thing was that now we were able to pick up everyone, but unfortunately Nelson and I had to drive separately.

The first thing we began to realize is that we missed some of the shared intimate times that we enjoyed with our original group together. We began to drive separate routes and end up together at the church and then do the same going home. We even found that we were being manipulated to do more errands than we planned to do. The enemy was trying to stretch us to our limits. We loved the people and wanted everyone to be helped and ministered to.

We know that this ministry was an onslaught into the enemy’s territory, and he was trying to taking advantage through divide and conquer! He wanted to stop us.

We began to realize that the choice to purchase the second van was maybe a good idea, but perhaps not God’s idea.  Not only did it cause us extra expense, but it opened a door for the enemy’s attack.

Through this experience, Nelson and I believe that the Lord wants us to work closely together, not separating in the capacity that we did, especially in these types of situations,  being watchful of each other.  We are stronger together.

Though the enemy wanted to “ultimately” stop these lives from being changed,  “God had the victory!” We never realized how deeply and powerfully this ministry would affect these lives…to the extent where they would begin to imitate what we were doing, to go back out into the streets and rescue others! To become ministers and begin ministries that would target those who were victims of drugs, because they understood their pain! God did more than we had ever imagined! We had ministered to champions! God began to use them mightily and is still using them today!

“You never know who you are ministering to. They could be a Saul. Saul was encountered by God and became one of the most powerful men of God in the Bible!”  “Paul!”

This was an Awesome experience for us! God is so Amazing!

A few years later the Lord began to call us to Belize. We had no idea of the Amazing Journey the Lord had in store for us.

(See testimony “Stepping into Our Journey” for continuing story)